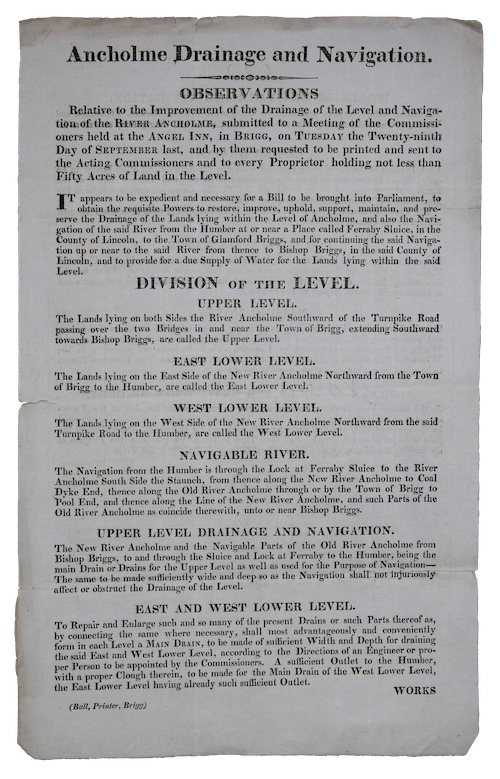 Brigg. Ball, Printer, [s.d., c.1800]
Call us Email us
Dimensions 200 x 340 mm. 2pp. Single sheet, printed on both sides. Numerous old folds, two short tears, early manuscript land tax notes to verso.
An apparently unrecorded circular, issued for the benefit of local landowners, regarding proposed improvements to the drainage infrastructure on the level of Ancholme River, Lincolnshire. The issue of effective drainage of the Ancholme Level had worsened in the latter years of the eighteenth-century, to redress this, commissioners appointed Isaac Leatham, of Barton near Malton, to produce a comprehensive report. He addressed issues regarding both drainage and navigation, and submitted his proposal in late 1800, though the projected cost for improvements of £22,975 was thought excessive. The commissioners subsequently approached civil engineer John Rennie (1761-1821) who produced a report in 1801. His proposals included constructing catchwater drains on either side of the main channel, enlarging the width and depth of the channel, building two new locks, and rebuilding the road bridge at Brigg. An Act of Parliament, required to proceed with the works, was obtained on 26th June 1802.
£ 125.00 Antiquates Ref: 12886
This site uses cookies.Find out more.