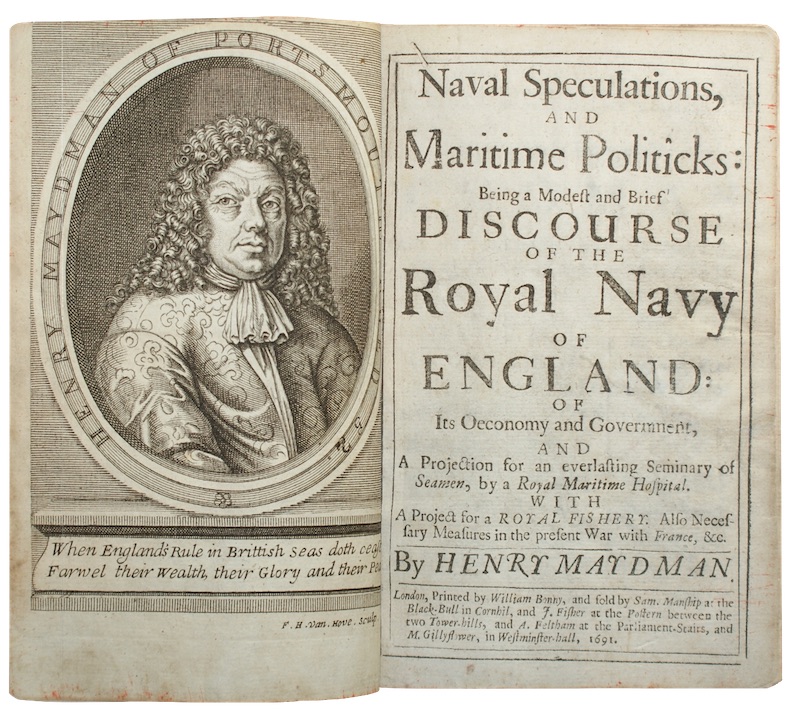 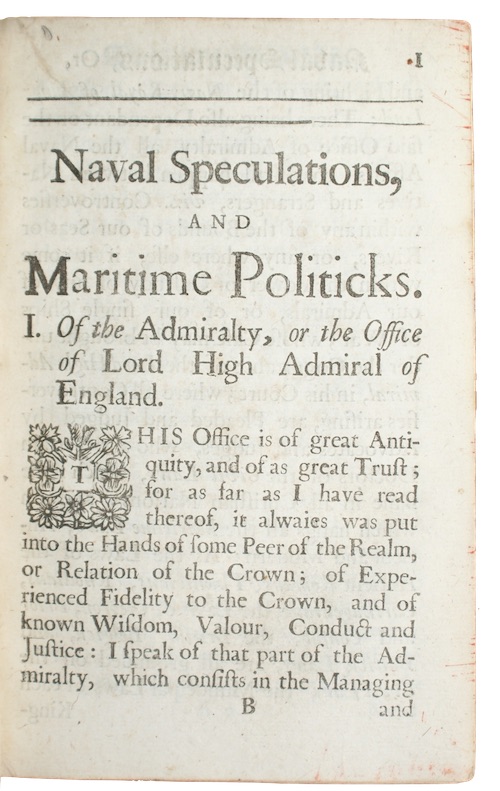 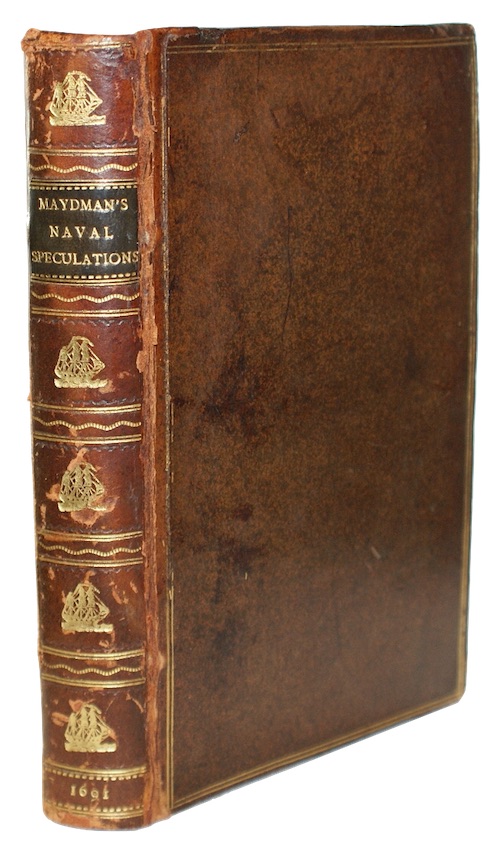 MAYDMAN, Henry. Naval Speculations, and Maritime Politicks: Being a Modest and Brief discourse of the Royal Navy of england:of Its Oeconomy and Government, and A Projection for an everlasting Seminary of Seamen, by a Royal Maritime Hospital. With A Project for a royal fishery. Also Necessary Measures in the present War with France, &c..

London. Printed by William Bonny, and sold by Sam. Manship, 1691. First edition.
Call us Email us
8vo. [32], 348pp, [2]. With an engraved portrait frontispiece and a terminal errata leaf. Without terminal blank. Contemporary gilt-tooled speckled calf, later rebacked, later contrasting black morocco lettering-piece. Rubbed, particularly to joints. Later plain endpapers, armorial bookplate of 'Thomas Foley' to FEP, with his ownership inscription to verso of frontispiece, very short closed tear to title - not touching text, worm-trail to upper margin throughout - occasionally touching running-title, slight loss to lower corner of P1, lower corner of Z1 repaired, lightly foxed.
An extensive monograph critiquing the administration of the Royal Navy, with proposals for the improvement of the service, by Henry Maydman, purser and mayor of Portsmouth for 1710. The work provides a succinct portrait of the economic and organisational makeup of the navy, before presenting detailed arguments for revisions and the introduction of new procedure. Maydman, for example, contends that greater provision ought to be made for poor male children in order to better facilitate recruitment; that the establishment of navy controlled fisheries for the purposes of rations supply be implemented; that trade with France be continued despite ongoing conflict; and that, this being a rather elaborate suggestion, captured French sailors be employed fishing the coasts of Newfoundland. The treatise was presumably written, at least in part, in response to the French defeat of the Anglo-Dutch fleet at the Battle of Beachy Head the year prior to publication; certainly there existed a great unease regarding the future of British naval strength following the alliance with the Netherlands instigated by William III. Maydman's work, seemingly disregarded by the naval authorities, presumably due to his criticisms of the conduct of the Admiralty, nevertheless provides a revealing portrait of the conditions of the Royal Navy in the closing years of the seventeenth-century.

Thomas Foley (c.1641-1701), politician, supporter of the Glorious Revolution, and latterly a member of the parliament of William III.