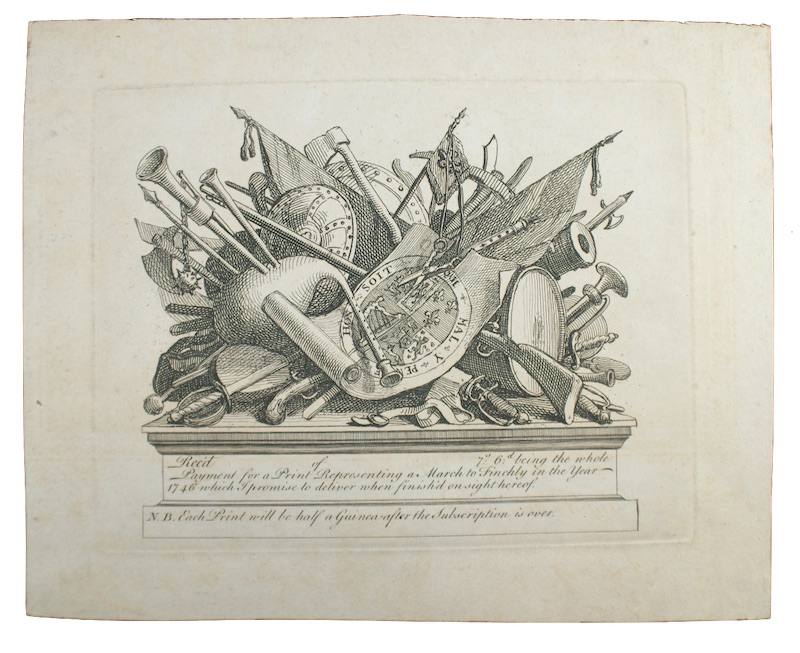 HOGARTH'S SATIRE ON THE '45

[HOGARTH, William]. [Etched receipt for subscription to 'a Print Representing a March to Finchly in the Year 1746'].

[London]. [s.n., c.1750]
Call us Email us
Dimensions 290 x 240mm, engraving 231 x 178mm . Etched subscription receipt; unused. Sometime mounted at corners, with removal marks to verso, slightly dusty, else fine.
Hogarth's famous oil painting 'A March to Finchley' depicted a disorderly gathering of English Guards at Tottenham Court Turnpike, before their assembly and direction to march north to defend the capital from the expected Scottish invaders of the 1745 Jacobite Rising. In true Hogarthian style, the satirical image sent up the disorder of those were supposed to be his Majesty's most reliable corps.

An engraving of it, made by Hogarth's assistant Sullivan, was published in 1750. This subscription receipt, featuring a stand of various English and Scottish arms and musical instruments surrounding a royal standard with scissors excising the Scottish Lion, offered the the work at 7s 6d, and noted that 'Each Print will be half a Guinea after the Subscription is over'.
£ 600.00 Antiquates Ref: 17178
This site uses cookies.Find out more.