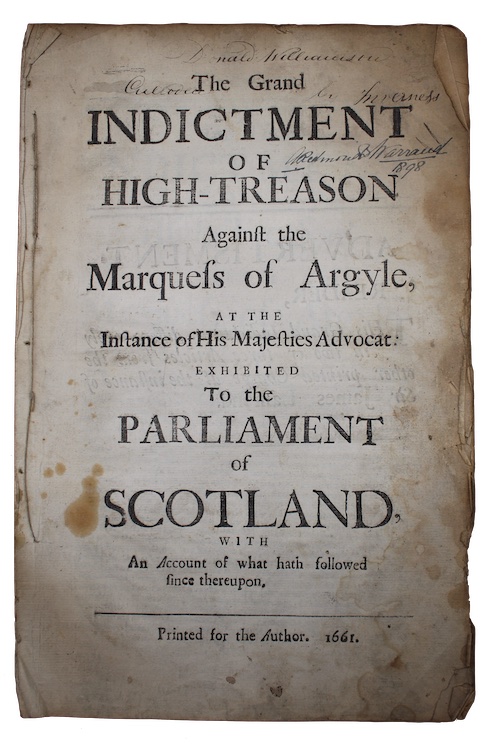 [TREASON]. The Grand indictment of high-treason Against the Marquess of Argyle, at the Instance of His Majesties Advocat: exhibited To the parliament of scotland, with An Account of what hath followed since thereupon.

[Edinburgh?]. Printed for the Author, 1661. First edition.
Call us Email us
Folio. 13pp, [1]. Uncut. Stitched, as issued. Chipping and light damp-staining to margins, occasional spotting. Early inked ownership inscription 'Donald Williamson / Culloden by Inverness', and later inscription dated 1898 to title page.
A rare survival of the published indictment of Archibald Campbell, Marquess of Argyll (d. 1661) on charges of high treason for his compliance with the Commonwealth. At the Restoration, Argyll had presented himself at Whitehall, but was at once arrested by order of Charles II and placed in the Tower (1660), before being sent to Edinburgh to stand trial. He was acquitted of complicity in the death of Charles I, and his escape from the whole charge seemed imminent, but the arrival of a packet of letters written by Argyll to George Monck, Duke of Albemarle (1608-1670) showed conclusively his collaboration with Cromwell's government, particularly in the suppression of Glencairn's Royalist rising in 1652. He was immediately sentenced to death, his execution by beheading on the taking place on 27 May 1661.

This work was published in various formats and at numerous locations. This folio edition, which Wing conjectured was printed at Edinburgh 'for the author', is rare: ESTC records copies at two locations in the British Isles (Inverness Public Library and NLS), and one further in North America (Huntington).
ESTC R218495, Wing G1498A.
£ 500.00 Antiquates Ref: 25305
This site uses cookies.Find out more.