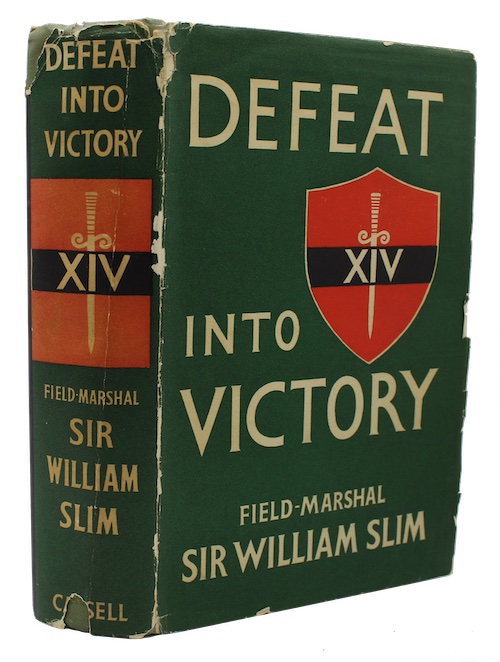 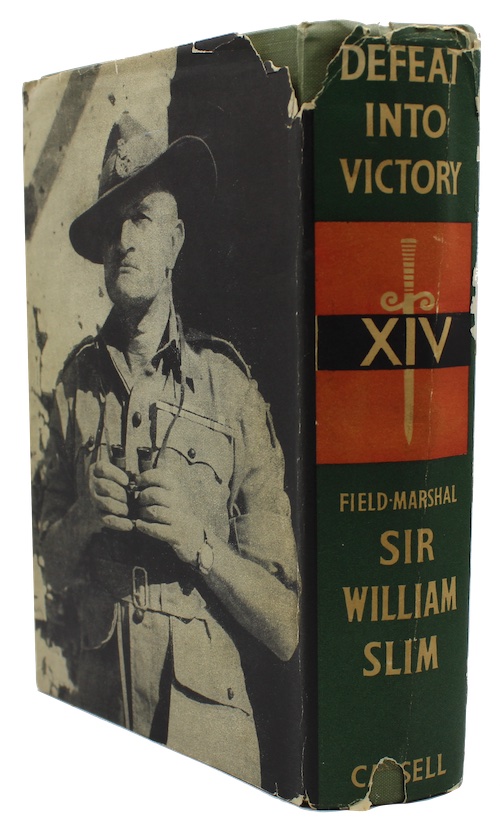 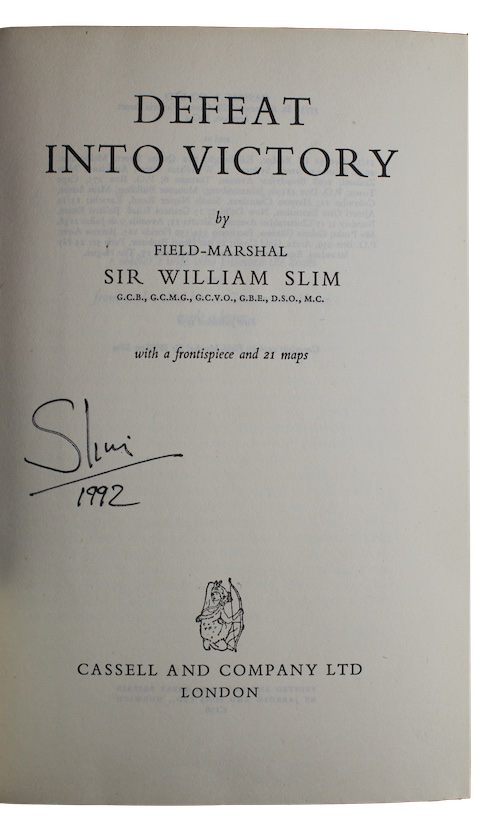 London. Cassell and Company Ltd., 1956. First edition.
Call us Email us
8vo. xi, [1], 576pp. With a photographic portrait frontispiece and 21 folding maps. Original publisher's green cloth, lettered in gilt, pictorial dustwrapper. A trifle rubbed, chipping to dustwrapper, loss to head of spine and lower panel, several clear tape repairs to verso. Inked note to recto of FFEP. Later inked inscription of Field Marshal Slim's son, John Douglas Slim (1927-2019) to title page.
Field Marshal William 'Bill' Slim, first Viscount Slim (1891-1970), British Army officer. Slim joined the army at the outbreak of the First World War and fought in the Dardanelles, France, and Iraq. In 1920 he received a regular commission and joined the Indian army, in which he served throughout the interwar period. At the beginning of the Second World War, he participated in the British conquest of Italian East Africa (1940). In 1942 he was appointed to command the 1st Burma Corps, conducting the retreat from superior Japanese forces that had overrun Burma. In 1943 he was given command of the 14th Army, with which he stabilised the front of the first Arakan campaign (February 1944), arguably up to then the worst-managed British offensive operation of the war. In consequence Slim devised new tactics adapted to jungle warfare, using aerial resupply and guerrilla warfare to assist his efforts in pushing the Japanese out of Burma. Rangoon (Yangon) fell on May 3, 1945, and in June Slim was made supreme Allied commander of ground forces in Southeast Asia. Following the war, in 1946, Slim was appointed commandant of the Imperial Defence College, and in 1948 became chief of the Imperial General Staff with a promotion to field marshal. He served as governor-general of Australia from 1953 to 1960. His memoirs, a personal narrative of the Burma campaign entitled Defeat into Victory (London, 1956) are a classic of the genre and amongst the best thought of campaign histories of the Second World War.
£ 200.00 Antiquates Ref: 25954
This site uses cookies.Find out more.