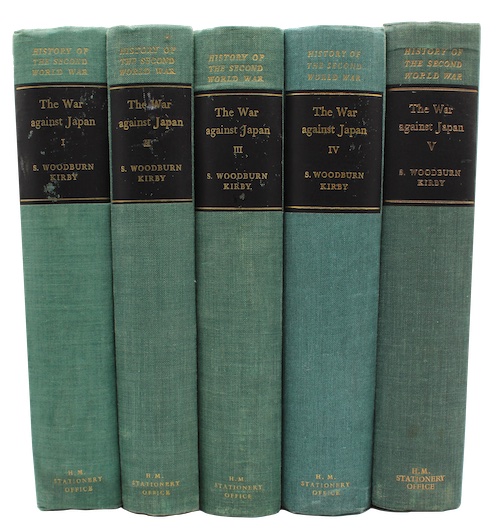 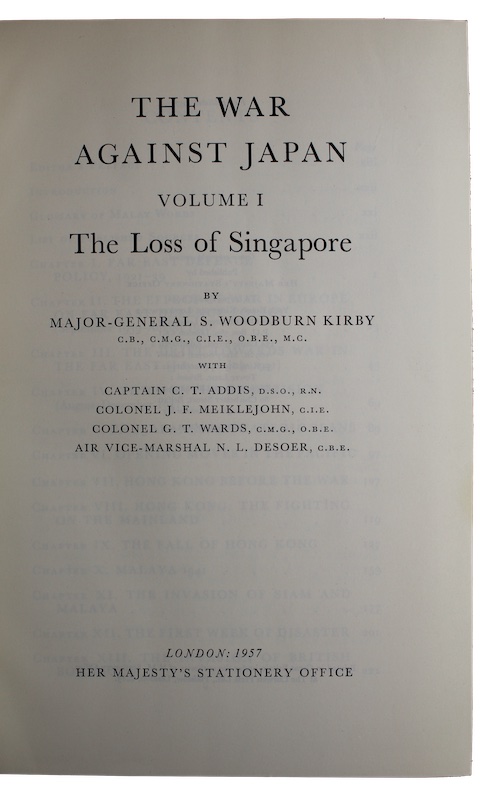 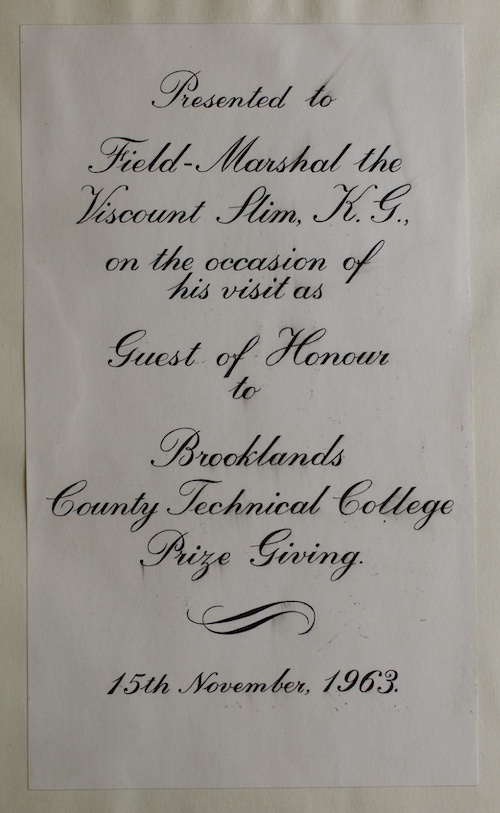 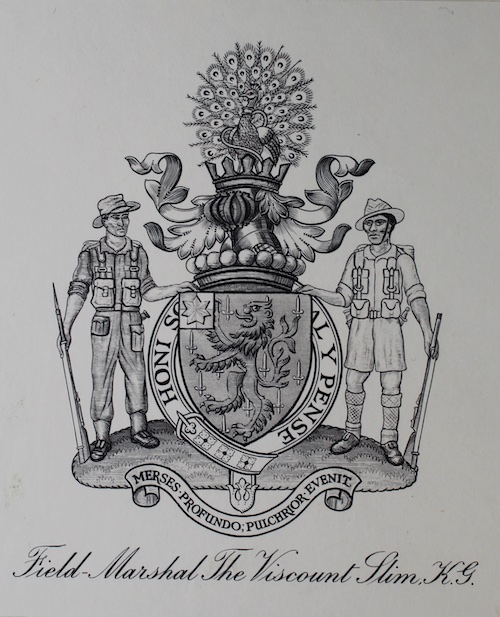 London. Her Majesty's Stationery Office, 1957-69 First edition.
Call us Email us
8vo. In five volumes. With the separately printed 8pp Corrigenda to Vol. I (including folding chart) loosely inserted. Original publisher's black and green cloth, lettered in gilt. Without dustwrappers. Lightly rubbed. Internally clean and crisp. Sunday Times Supplement clipping tipped-in to title page of Vol. IV. Armorial bookplates of Field Marshal William Slim to FEPs of Vols. I-III, with his inked ownership inscriptions to FFEP of Vol. II and half-titles of Vol.s III-V. Presentation plate pasted to FFEP of Vol. I.: 'Presented to Field-Marshal the Viscount Slim, K.G., on the occasion of his visit as Guest of Honour to Brooklands County Technical College Prize Giving. 15th November, 1963'. Signed by the author, S. Woodburn Kirby, and additional contributors, M. R. Roberts, G. T. Wards, and N. L. Desoer, to FFEP of Vol. IV.
A rarely seen complete set of first edition, with remarkable provenance, of an authoritative and exhaustive history of the operations of British and Commonwealth forces against Japan during the Second World War.

Field Marshal William 'Bill' Slim, first Viscount Slim (1891-1970), British Army officer. Slim joined the army at the outbreak of the First World War and fought in the Dardanelles, France, and Iraq. In 1920 he received a regular commission and joined the Indian army, in which he served throughout the interwar period. At the beginning of the Second World War, he participated in the British conquest of Italian East Africa (1940). In 1942 he was appointed to command the 1st Burma Corps, conducting the retreat from superior Japanese forces that had overrun Burma. In 1943 he was given command of the 14th Army, with which he stabilised the front of the first Arakan campaign (February 1944), arguably up to then the worst-managed British offensive operation of the war. In consequence Slim devised new tactics adapted to jungle warfare, using aerial resupply and guerrilla warfare to assist his efforts in pushing the Japanese out of Burma. Rangoon (Yangon) fell on May 3, 1945, and in June Slim was made supreme Allied commander of ground forces in Southeast Asia. Following the war, in 1946, Slim was appointed commandant of the Imperial Defence College, and in 1948 became chief of the Imperial General Staff with a promotion to field marshal. He served as governor-general of Australia from 1953 to 1960. His memoirs, a personal narrative of the Burma campaign entitled Defeat into Victory (London, 1956) are a classic of the genre and amongst the best thought of campaign histories of the Second World War.
£ 1,500.00 Antiquates Ref: 25962
This site uses cookies.Find out more.